The Carpers Who Hate The Singapore Summit

The naysayers and Trump haters, in their criticisms of the Singapore Summit, are wilfully ignoring the point that Summit was just a part of the process of detailed negotiations going on between USA and North Korea, and ROK and North Korea.

They also ignore the fact that no other president would have met Kim Jong-un, without North Korea first meeting conditions that would be in effect have meant the unconditional surrender of North Korea.

There is a seachange of attitude from North Korea wrt its interactions with the rest of the world. This is a once in a generation opportunity to heal a decades old sore.

Like it or not, Trump is part of this process!
Posted by Ken Frost at 1:35 AM No comments: 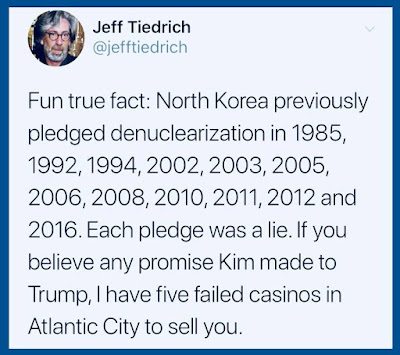 Email ThisBlogThis!Share to TwitterShare to FacebookShare to Pinterest
Labels: north korea
Newer Posts Older Posts Home
Subscribe to: Posts (Atom)
Welcome to "In Your Face", thought provoking opinions on topical issues, brought to you by www.kenfrost.com "The Living Brand".